“Properly, we should read for power. Man reading should be man intensely alive. The book should be a ball of light in one's hand.”  Ezra Pound (1885 - 1972)﻿  HOWLING DOG PRESS is actively engaged in the creation of balls of light, by which society might be transformed.  Whether books-in-print, e-books, or online magazines, our mission is to eradicate ignorance through the transformation of language, on the page, on the screen, upon the tongue, within the skull ...﻿

:: QUINTET FOR THE APOCALYPSE ::

As a "language poet," MICHAEL D. MAIN is a consummate developer and redeveloper of poetry systems, often working with Hinge Theory, originally created by Heller Levinson with Michael Annis, and via elements found in a "grammaring matrix" as proposed by Henry Avignon, but adapted to literary disciplines.  From these systems, Michael Main has created startling advances in style and syntax, with a literary voice that is quite original, although he gives credit to other writers and artists as being mentors and inspirations in his own creative journey. Here follows what Michael Main says about his work and himself:

"I desire to spur language, thought, and visions for the 21st Century with equivalent assertions such as were engendered out of earlier 20th Century movements birthed in the revolutionary European avant-garde. As a Language Poet, I attempt to push toward vigorous change, and to plunge within myself in writings to capture and bring back documents truly worth reading and studying for the long term of the lives of authentically curious readers. I wish to be insistent of my readers to be fearless, an expounder of ideas, images, and symbolism, and, always, to be and remain passionate. Passionate, that is, about what I do, and about writing and poetry in total. I most desire to combine such passion with the emphatic, magnetic personality of a man who has managed to remain resolutely himself ... a poet whose intricacies obviate facile recapitulation. I strive to go deep into human history, personal narrative, and the chronicle of the body itself. I strive to reinvent the language to capacitate such a journey with singular authority." ~ Michael D. Main 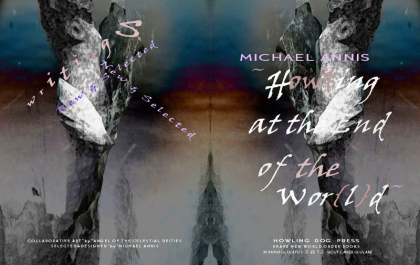 HOWLING at the END of the WOR{L}D

What might we find in this new collection of works?... Human consciousness is erected upon, cultivated through, and sustained by metaphors, allegories and abstractions. These abstractions manifest as spirituality. Man is a myth unto himself1 and the personal interpretation of the abstract is the only reality2.  Art, poetry, history, drama, dance, literature—in essence, all nine “muses of Apollo” serve these notions.  The creation of a new communication, veritably, a new non-trauma based language that eradicates war, suffering, and the destruction of the planet, is the objective. The rebuilding of human identity is prerequisite to lasting peace and a greater human unity intended to awaken the Christ within each living being. Language is the progenitor and catalyst of awakening; for too long the language of war, greed, dominance, and conquest—the language of death— has been the vehicle of human evolution.

The book's title, “Howling at the End of the World,” is premeditated as an intentional irony, for the death of the old world precipitates the birth of the new Being, a new species of humanity invested in the articles and actions of peace, harmony, and reciprocation of energies toward the shifting of consciousness to new identities as "inhabitants" of the universe rather than “occupiers” of earth, with the resultant miracle of consciousness fully liberated. The realization of this new identity will be by and through the creation of new language—a language of LIFE.  In order to rebuild human identity, to understand fully the meaning of being eternal Existents in the grand matrix of the cosmos, we must first rebuild and expand language to bring about expanded awareness and ensuing expanded presence.

All prisoners struggle with deep and powerful issues of identity loss; identity loss consumes the inmate; identity loss disempowers and disgenuinates human consciousness particularly for those imprisoned. The human race itself, as a species, is now imprisoned within the straightjacket of alienation from the civilization it has struggled for centuries to create, for that civilization is one of continual war and conflict,  and is trauma-based. The quest of the prisoner is to rebuild identity once paroled, yet before true liberation can come, identity must be reestablished and it cannot be the identity of the imprisoning mindset. The power of language upon DNA is analogous to the power of sunlight upon life itself.

Through the transformation and rebuilding of language, the constructing of higher memes will direct and empower DNA toward its perfected state. Language is the holy trinity: creator, transfigurer, and liberator. Language is liberation theology setting afire and releasing the new man burning within the old man and rebuilding/rebirthing identity for the individual and for the species itself.

Metaphorically speaking, what might the world look like today if religion and philosophy had stood on the street corners of existence prophetically bearing signs that read “the beginning is near” rather than “the end is near” which has been, quite literally, the message of religion for the last 2,000, or more, years.  It is language that drives and defines human consciousness. In the language of death, a circling flock of vultures equates to death.  In the language of liberation, that same circling flock equates to transfiguration; that shift in the perception of language empowered the ancient Egyptians and prepared them for the afterlife.

Howling at the End of the World, literature by Michael Annis

with artwork by Angel of the Celestial Deities﻿﻿ 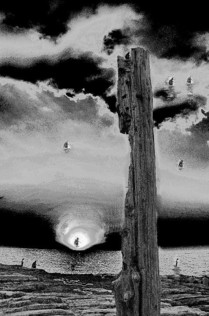 ... poets, writers, hingesters, and artists from our pages

We "deliver" through the US Postal Service [or via UPS, or FedEx if you want to pay extra] ...

Welcome to our internet debut!  Actually, not our debut, but newly revised.  Howling Dog launched a 600+ page website devoted to radical writing and radical cultural insurrection in 2004, but our hosting company, a company bought out by Orange County Hosting, allowed it to be hacked to death, and most of it was lost.  We've gone through several transmutations since then, none of which ever recovered the sheer dynamic breadth of the original site, unfortunately, but we're back again, and will be continually rebuilding and adding on to our list of bones to gnaw and pick over.  So under those parameters, again, Welcome to Howling Dog Press.  Tell 'em we're coming and hell's coming with us.